Hi, folks! I hope you have fun while you´re reading, writing, learning and meeting friends in our blog. Feel free to comment and show us your ideas and opinions about the topics we have here for you!
Last class we talked about buildings, facilities, rooms, properties. We started our lesson by watching a video about one of the most famous buildings in the world: CN TOWER, in Toronto, Canada. Now you have the opportunity to get more information about it. Read the article below, then write about what you consider very interesting about that. Enjoy!!
The CN Tower is a communications and observation tower in Toronto, Ontario, Canada. Standing 553.33 metres (1,815.4 ft) tall, it was completed in 1976, becoming the world´s tallest free-standing structure and world´s tallest tower at the time. It held both records for 34 years until the completion of the Burj Khalifa and Canton Tower. It remains the tallest free-standing structure in the western hemisphere, a signature icon of Toronto's skyline, and a symbol of Canada, attracting more than two million international visitors annually.
Its name "CN" originally referred to Canadian National, the railway company that built the tower.  Since the name CN Tower became common in daily usage, the abbreviation was eventually expanded to Canadian National Tower or Canada's National Tower. However, neither of these names is commonly used. In 1995, the CN Tower was declared one of the modern Seven Wonders of the World by the American Society of Civil Engineers.
The CN Tower consists of several substructures. The main portion of the tower is a hollow concrete hexagonal pillar containing the six elevators, stairwells, and power and plumbing connections. On top of this is a 102-metre (334.6 ft) tall metal broadcast antenna, carrying TV and radio signals. There are two visitor areas: the main deck level (formerly known as SkyPod) located at 346 metres (1,135 ft), and the higher Sky Pod (formerly known as "Space Deck") at 446.5 metres (1,465 ft), just below the metal antenna. The hexagonal shape can be seen between the two areas; however, below the main deck, three large supporting legs give the tower the appearance of a large tripod.
The main deck level is seven storeys, some of which are open to the public. Below the public areas — at 338 metres (1,108.9 ft) — is a large white donut-shaped radome containing the structure's microwave receivers. The glass floor and outdoor observation deck are at 342 metres (1,122.0 ft). The glass floor has an area of 24 square metres (258 sq ft) and can withstand a pressure of 4,100 kilopascals (595 psi).
The floor's thermal glass units are 64 millimetres (2.5 in) thick, consisting of a pane of 25-millimetre (1.0 in) laminated glass, 25 millimetres (1.0 in) airspace and a pane of 13-millimetre (0.5 in) laminated glass. Some people experience acrophobia when standing on the glass floor and looking down at the ground 342 metres (1,122.0 ft) below. In 2008, one elevator was upgraded to add a glass floor panel, believed to have the highest vertical rise of any elevator equipped with this feature. The Horizons Cafe and the lookout level are at 346 metres (1,135.2 ft). The 360 Restaurant, a revolving restaurant that completes a full rotation once every 72 minutes, is at 351 metres (1,151.6 ft). When the tower first opened, it also featured a disco named Sparkles, billed as the highest disco and dance floor in the world.
The Sky Pod is the second-highest public observation deck in the world, surpassed only by the Shanghai World Financial Center. On a clear day, it is possible to see 100 to 120 kilometres (62–75 mi) away, to the city of Rochester across Lake Ontario in the United States, the mist rising from Niagara Falls, or the shores of Lake Simcoe.
NOW THAT YOU BECAME AN EXPERT IN CN TOWER AND SKYSCRAPERS, WRITE YOUR OPINION ABOUT IT! AFTER THAT, HAVE SOME FUN SEEING THE PICTURES I TOOK THERE LAST YEAR. 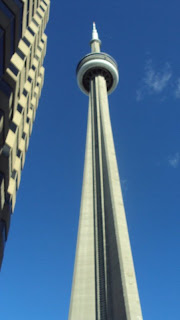 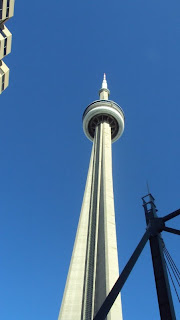 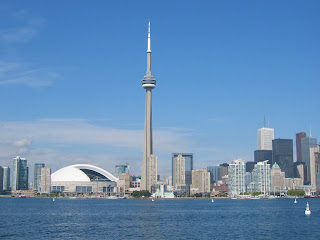 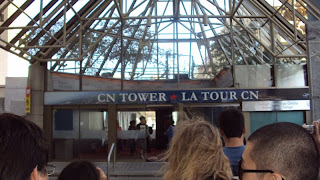 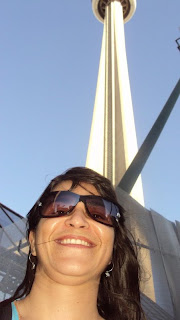 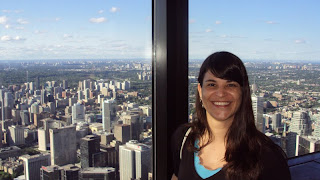 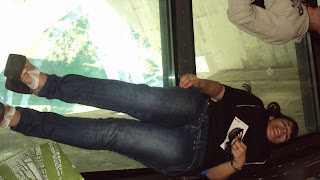 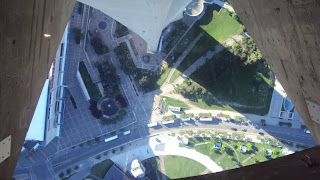 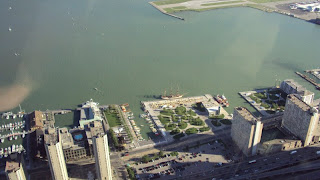 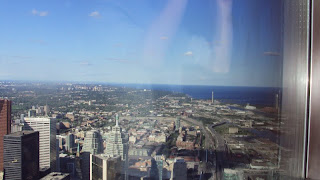